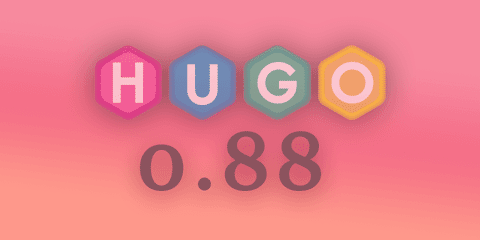 The most important piece in this release is the Go 1.17 update. This release is built with that new Go version, but also and more importantly, the Hugo Modules logic has been updated to support Go’s new way of (lazy) loading transitive dependencies. If you already have Go 1.17 installed, building existing Hugo Modules backed projects have not been an issue, but hugo mod init for a new project could give you too new versions of transitive dependencies. Hugo 0.88 fixes this.

This release represents 26 contributions by 6 contributors to the main Hugo code base.@bep leads the Hugo development with a significant amount of contributions, but also a big shoutout to [@dependabotbot], @helfper, and @wzshiming for their ongoing contributions.

Many have also been busy writing and fixing the documentation in hugoDocs, which has received 9 contributions by 6 contributors. A special thanks to @bep, @jmooring, @StevenMaude, and @coliff for their work on the documentation site.